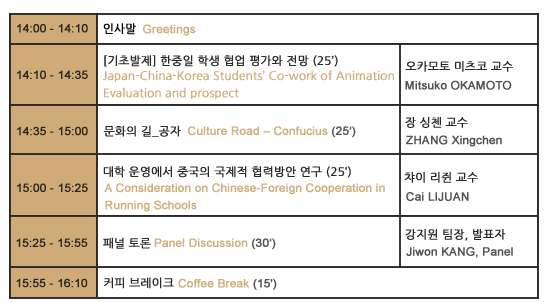 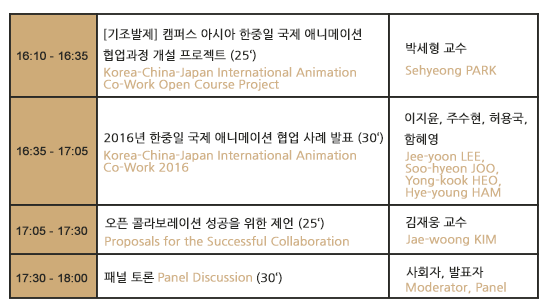 The Japan-China-Korea Student Animation Co-work project created by Korea National University of Arts, Communication University of China and Tokyo University of the Arts stands out on the world’s stage as an exceptional international educational program.

Three (or four) students from Japan, China and Korea form a team to produce a short animation. They do pre-production via Skype, and then get together for a training camp to complete their animation projects with visuals and audio. The three schools work together to give students advanced technical skills, outstanding communication skills and the right environment for the short animation collaborations with overseas students.

The Co-work project began in 2010 with Korea and Japan, and in 2012 expanded to its current scale with three countries. This year marks the seventh Co-work project. Furthermore, the Co-work project was selected for the CAMPUS Asia program sponsored by the three governments and is on the cusp of new developments from 2017 onwards.

Necessity of Co-Production Program of Animation in Korea, China and Japan of East Asia

1.The rapid development of media in Korea, Japan and China, the IT powers of Northeast Asia, is now creating enormous potential for new video culture and serious side effects. Behind the abundant expression and acceptance of movies for general theater and animated films, there is a dark shadow of digitalization over the youth and the elderly, such as internet overuse and game addiction. And before the social system is ready, the fusion of Art and Technology is going on at a pace that can not afford it.

In the 21st century, it is important to educate and utilize arts and sciences technology and human resources in harmony. As a methodology of education, creativity development, and market creation, we need training courses in arts, science, and humanities, which can be found in the process of creating new concepts. The animation of the era of the smart media has a production process and a methodology which goes beyond the category of animation and covers the boundaries of form art, sound, humanities and media technology. One of those examples is the fact that the proportion of VFX effect in the general movie is getting higher and the related technology is developing rapidly. In addition, the promotion of early international exchange of arts and technology related to this in the SNS environment, where the meaning of classical border is already disappearing, is meaningful not only for the development of contents culture industry in each country but also for the cultural win-win of universal value of humanity based on new technology.

2. The Cultural Belt that links East Asia with Seoul, Beijing and Tokyo is a center of its long history, storytelling and abundant oriental culture, with relics and cultural elites gathering, various cultural facilities, digital devices and high-speed internet system infrastructure. Therefore, it can be said that this is the best place for smart media association event. And there are already historic cultural foundation of the history, and advanced video media infrastructure has the world-class background

3. Animation no longer stays at the boundary of cartoon movies. It is expanding its role as a suitable image of global business that replaces photographic images in all areas of the Internet and smart media. Especially after the post-Cold War era, the confrontation between ethnicity, religious society, culture, and customs has intensified rapidly, and manga and anime images that do not have a preconceived notion about the border of photography are effective for various social networks. Since the essence of the smart media era is the promotion of international communication, the experience of exchange of such content without racial or religious prejudice is the gateway to true international goodwill. Animation has already overcome the limitations of comics and comic videos and has a comprehensive form of art and technology that encompass contemporary digital culture.

In the future, it is expected to become a center of new transformation in the process of preparing for the age of full-scale interactive media expressed as 3D augmented reality, holographic video, and virtual reality. Also it can be expected that the exhibition performance art expressed in art and music, which is a unique cultural power of Northeast Asia region, and the technical capacity of the visual culture can be complemented and utilized. As a youth culture event for fusion and combination of art and technology, it is possible to jointly promote various cultural events that are already formed in East Asian region. Due to the high education heat unique to Northeast Asia region, It is possible to promote the heat of the related education and the development effect.